‘A hugely satisfying read.’ — Nick Curtis, Evening Standard
‘Best new fiction of the year . . . Lewis has created a rich tapestry of life. In lean poetically precise prose he lays bare the realities of a town in decline and reveals the fears, secrets and aspirations that animate ordinary lives. This highly accomplished novel is a moving and humane portrait of smalltown America, a vision of Trump’s republic in miniature.’ —Simon Humphreys, Mail on Sunday
‘The story is tightly and neatly constructed, and the hermetic nature of Bealport––where people live for the demolition derby, snowmobiling playoffs, the annual seaside picnic and the dignity of a day’s work––is deeply appealing, drenched in sympathetic nostalgia, folksy charm and pithy one-liners.’
—Kim Fu, TLS

‘In the small town of Bealport, Maine, Jeffrey Lewis has rendered a sharp and fascinating “Our Town,” the community captured in its rough simplicity and broody with personal secrets. In deft command of their lives’ interconnectedness, Lewis roves amongst Bealport’s residents, entwined and reliant as only those living in a very small town can be, an attentive and welcoming storyteller with a fine Old New England sensibility.’ —David Milch, creator of Deadwood

‘With his beautifully written Bealport, Jeffrey Lewis has masterfully woven friction between social classes, a fading industrial town in Maine, opioid addiction, sexual scandal, financial machination, and the making of a good pair of shoes into a quilt of such subtle colorations that the reader is surprised and even shocked by their force–a stunning and heartbreaking depiction of America today.’
—Peter Davis, author of Girl of My Dreams and director of Hearts and Minds

‘Bealport reveals to us all the angst and joy in small town, working class America and does it in a readable, but never simplistic, style which carries us from the first page to the last. The characters are fully drawn with tremendous understanding, humor and empathy. Mostly they are poor in riches but rich in spirit. Brilliant and, above all, thoughtful and kind. Read it. I think you’ll love it.’
— Robert Ward, author of Red Baker and Four Kinds of Rain

‘Though Lewis’s tone is measured, plenty of righteous anger lies just below the surface. It’s the little details that make this novel sing, however – and it’s what makes its conclusion that much more crushing, however inevitable.’ — Tobias Carroll, Portland Press Herald

An old shoe factory in a coastal New England town is up for sale again. When it’s bought by a venture capitalist with a fondness for the factory’s shoes, a story with profound implications is set in motion. NORUMBEGA (Makers of Fine Footwear Since 1903) is a hobby for Roger Keysinger. For the residents of Bealport – whose livelihoods, self-respect, and interconnectedness hinge on its survival – it is something infinitely greater. Unsparing, comic, tragic, and universal, Bealport is a portrait of a town, of towns like it across America and beyond, and of a way of life that is passing.

Jeffrey Lewis reads from Bealport at a book party:

Also by this author, Meritocracy: A Love Story, Adam the King, The Conference of the Birds, Berlin Cantata, The Inquisitor’s Diary, and The Meritocracy Quartet. 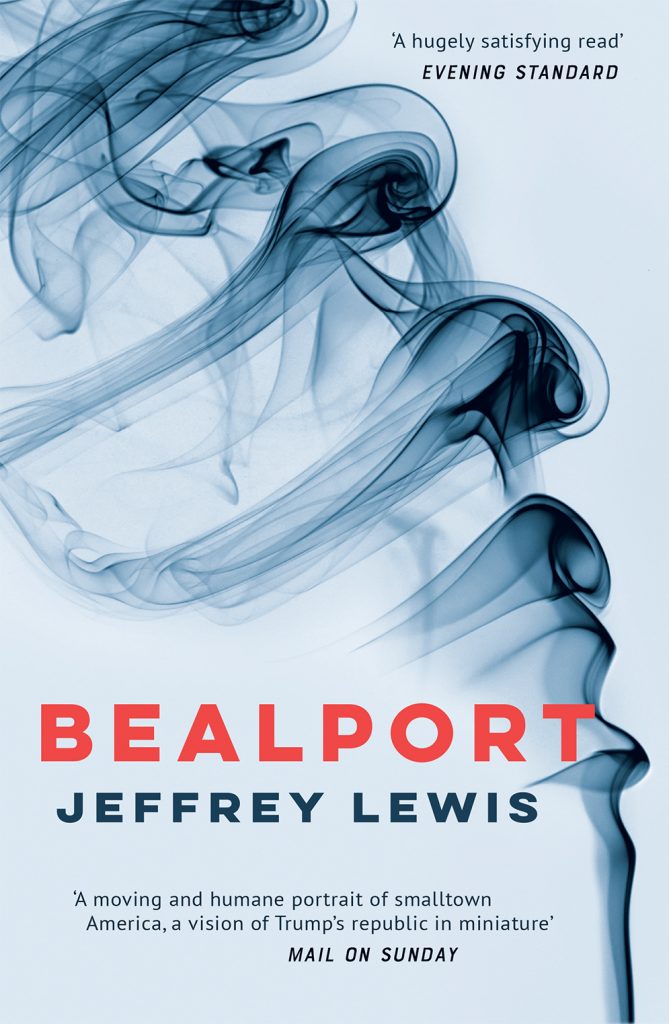