‘thoroughly researched, carefully written and entirely plausible. It gives you the strongest possible sense that this is what Mann was thinking, and feeling, at this critical moment in his life’ – Independent

‘an intriguing and admirable attempt to map the mental and intellectual journey that brought Mann from thinking he could not write outside of Germany to realizing, as he famously and defiantly put it, “Wo ich bin, ist Deutschland.”’ – LA Review of Books

‘Böhler is at her best when exploring the trials of exile, the mixture of outrage, nostalgia and impotence with which Mann watches his chances of reclaiming his German life shrivel up. In efficient prose Böhler pleasingly combines the mundane and the exalted…The result is a very lifelike portrait’ – Times Literary Supplement

‘a splendid novel […] Britta Bohler has written an important book, a beautiful creation. The Decision stands as a remarkable beginning of a literary career.’ – New York Journal of Books

‘While Mann kept detailed diaries, they give only a sketchy account of this period, and Britta Bohler’s imagination fills the gaps of his inner life.’ – Sydney Morning Herald

‘An artfully crafted and constructed book, from its musical movement-arrangement to the sheer amount of information about Mann Böhler packs into this relatively short novel.’ – Complete Review

‘Deploying a sonata-like structure (each day akin to a musical movement), this novel presents a snapshot of Thomas Mann at a crucial moment in his life.’ – Compulsive Reader

‘a wonderful novel, an immersive and psychologically convincing account of Mann’s agony of decision’ – Jildy Sauce

‘This book dares to give a promising insight into a critical moment in the life of Thomas Mann.’ – Frankfurter Allgemeine Zeitung

This intriguing novel follows the German novelist Thomas Mann during three days in 1936. Away from home in Switzerland and fearing arrest on his return to Germany, Mann is confronted with the decision of whether or not to go home. He decides to write an open letter to the Nazi regime to be published in a Swiss newspaper, but is tortured by doubt: his publisher in Germany, a Jew, will be furious with the unwelcome attention drawn to his publishing house; by choosing exile isn’t he abandoning his loyal readers in Germany? Will the Nazis burn his books? Will they confiscate his diaries full of his intimate, homo-erotic confessions?
Böhler shows Mann as a human soul, trapped in an historical setting that forces him to make a seemingly impossible choice. These three days were only sparsely covered in Mann’s diaries and The Decision fills this gap in the most compelling and convincing way.

Britta Böhler is a Dutch lawyer of German descent. She has represented Volkert van der Graaf, the assassin of Dutch politician Pim Fortuyn, Ayaan Hirsi Ali and many others. A member of the Dutch senate until 2011, she now teaches at Amsterdam University. Visit Britta’s website, here. 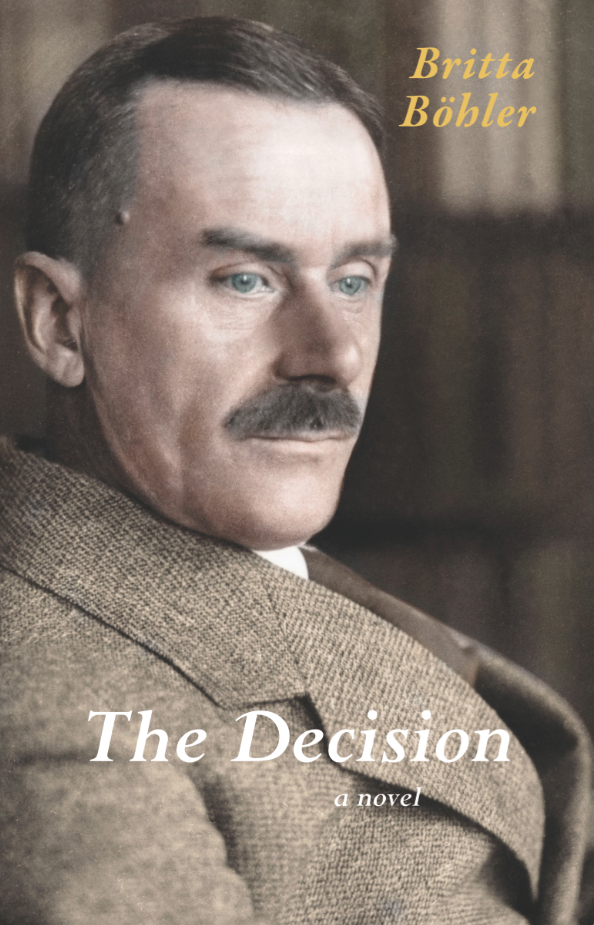