CONSEQUENCES OF THE PEACE
The Versailles Settlement: Aftermath and Legacy

‘What an intellectual feast Alan Sharp and his collaborators have served us with this comprehensive treatment of the peace conferences that ended the Great War!’ – William R. Keylor, Boston University

This final volume in the series evaluates the immediate and later effects of the last great peace gathering which sought to settle the world’s affairs at a stroke – something that was not attempted after either the Second World War or the Cold War. The Versailles settlement has not enjoyed a great reputation. It has been blamed for causing a second major conflict within a generation, thus apparently fulfilling Marshal Foch’s gloomy prediction that ‘This is not a peace, it is an armistice for twenty years’. More recently commentators have suggested that the post-1989 ethnic disturbances in the Balkans and on the fringes of the former Soviet Union are ‘the old chickens of Versailles coming home to roost’. The contemporary world still struggles to come to terms with the implications of President Woodrow Wilson’s troublesome principle of national self-determination, and remains embroiled in the ambiguities and complexities of the Middle East, an area for whose boundaries and problems the Great War and settlement bear significant responsibility. We are also still seeking to realise more effectively some of the nobler ambitions of the peacemakers, expressed in the Covenant of the League of Nations, in their concern for the human rights of minority nationalities left on the wrong side of the new borders that they sanctioned, and in their attempt to extend criminal responsibility for war beyond the operational irregularities of combatants to political and military leaders. Ninety years on, the settlement still casts a long shadow.

ALAN SHARP was Professor of International Studies and Provost of the Coleraine campus of the University of Ulster. His teaching, research and writing has focused on 20th-century international history and British foreign policy after the First World War. 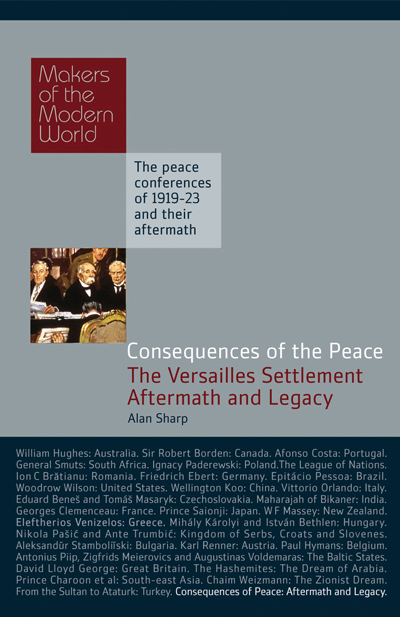